We can provide expert low cost daylight design advice and assessment reports on both new developments and any existing surrounding properties that will be accepted by all Local Authorities throughout the UK.

Whether you are a local home owner wanting to extend your property or a developer looking to build something bigger, we can carry out all the calculations required to assess your plans.

Before a new development can be built many Local Authorities will ask for evidence that any surrounding properties will not be negatively impacted by the proposed development. To determine this, we can run number of simulations to assess the effect on natural daylight and sunlight received. These include:

As well as investigating the impact on natural daylight and sunlight on the surrounding properties, Local Authorities will usually also request that the proposed development itself will receive a sufficient amount of natural light. Whether this is for BREEAM purposes or for any other planning requirement we can run a number of daylight calculations and simulations to satisfy your planning conditions. These include:

Please contact us today if you require a Daylight, Sunlight and Overshadowing Assessment carried out.

Learn more about the daylight and sunlight assessment calculations & simulations we perform.

For the Obstruction Angle Test a plane is drawn at 25° from the horizontal centre of an existing window. If a proposed new development intersects with this plane, then it could influence the internal daylight levels of the surrounding properties and further calculations will be required to determine if the amount of daylight received is still satisfactory.

The Vertical Sky Component of a window is a measure of the amount of sky that is visible from the vertical centre of the window. To provide a good level of natural daylight the VSC of the main window to a room needs to be 27% or greater. If the VSC is less than the required 27% then a further comparison of the existing and proposed VSC levels is required.

For surrounding properties, if the VSC is less than 27% a good level of natural daylight can still be determined providing the VSC level is within 80% of its former value.

No Sky Line / Daylight Distribution within each Room

The No Sky Line calculation investigates the distribution of daylight across a room at working plan height. The area of the working plan with a view of the sky should not drop below 80% of its former value, when compared between the existing and with the proposed new development in place. 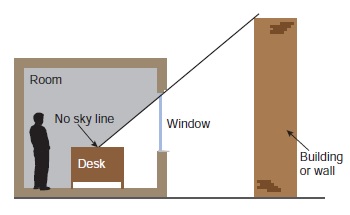 To determine if an adequate amount of sunlight is achieved within a room the following criteria needs to be met.

At least one main window wall should face within 90° of due south and.

To be determined as adequately sunlit throughout the year, at least half of a garden and other similar open spaces should receive at least two hours of sunlight on 21st March.

If an existing garden or open space area is being calculated due to a proposed new development, the result should be no less than 80% of its former value in order for a loss of light to not be noticeable.

If a room is lit by windows in one wall only, the depth of the room ‘L’ should not exceed the limiting value given by:

The average daylight factor is the ratio of the average illuminance on the working plane in a room, divided by the outside illuminance on a horizontal surface under a CIE overcast sky. The ratio is usually expressed as a percentage, with typical ranges of less than 2% meaning the room is under daylit, 2-5% the room will be moderately daylit and greater than 5% meaning the room is sufficiently daylit.

The average daylight factor can be calculated either by hand using the following equation: 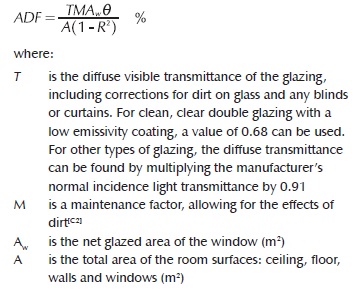 Using Climate Based Daylight Modelling in place of daylight factors provides far greater detail about light distribution and intensity which allows the building design to be adjusted to maximise the use of sunlight and daylight. Actual location dependant annual weather data is used to calculate lux levels and targets can be set which are relative to user needs.

Climate Based Daylight Modelling has two main criteria to assess whether a room will be sufficiently daylit, Useful Daylight Illuminance (UDI) and Spatial Daylight Autonomy (DA).

UDI is defined as the annual occurrence of illuminances across the work-plane that is within a range considered “useful” by occupants – 100 to 3000 lux. This is subdivided:

A minimum target of 80% UDI-a for each occupied space is considered acceptable.

DA is the amount of time a space can expect to reach a target illuminance level on the working plane. This criterion is aimed at delivering an energy efficient space. A minimum DA of 50% for each occupied space should be targeted.