Since 2008 Energy Performance Certificates (EPC’s) have been required on both domestic and non-domestic buildings whenever they are sold, rented, or constructed. Under an EPC a building’s energy efficiency is rated on a scale from A to G, with an A rating being the best (highest efficiency) and a G rating being the worst (lowest efficiency).

The Minimum Energy Efficiency Standards (MEES) were first brought into law in April 2016, under The 2015 Energy Efficiency Regulations and initially allowed tenants to request a landlord make improvements to their property in order to make it more energy efficient.

From April 2018, rental properties by law must achieve an EPC rating of at least an E or above or a new tenancy cannot be granted to either existing or new tenants.

Further still landlords will not be permitted to continue letting a property if its EPC rating is not at least an E or above with this requirement expected to come into force in April 2020 for domestic properties and April 2023 for non-domestic properties.

Looking forward the into the future it is expected that the government will increase the current minimum standard of an E rating to a D rating within the next 10 years, then a C rating within 15 years. 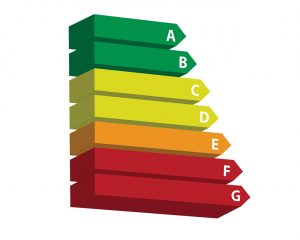 Which Buildings are exempt from the Minimum Energy Efficiency Standards (MEES)

As with most legislation there are a few exemptions to the rules. The Minimum Energy Efficiency Standards will not apply to a building where:

What are the Penalties for Non-Compliance?

If a landlord fails to comply with the Minimum Energy Efficiency Standards regulations and his building does not qualify as an exemption, then they could face a civil penaltyenforced by Local Weights and Measures Authorities (LWMAs).

Landlords renting out a non-complaint domestic property could face a penalty of up to £5,000. Further penalties could be incurred if the tenant changes and the property is still non-complaint.

How we can help

If your property requires an Energy Performance Certificate contact us today.

We can provide energy performance certificates for a range of buildings from the simple to the most complex level 5 commercial buildings.

If you already have an EPC but the rating is worse than an ‘E’, we can help you to find the most cost effective ways of improving your properties energy efficiency, saving you money and avoiding the possibility of receiving a fine under the Minimum Energy Efficiency Standards.